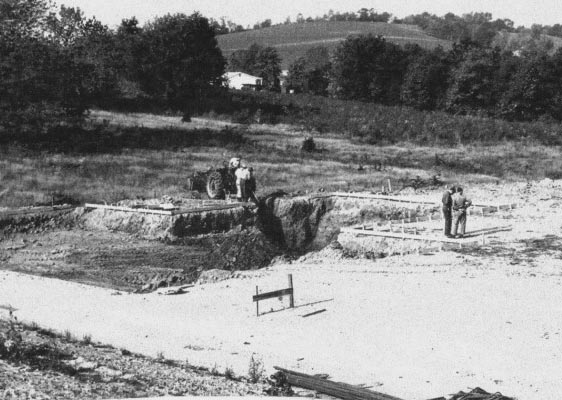 For 50 years, as of 2011, the Franklin Community Park has brought people together.

“It developed friendships that lasted through people’s lives,’’ said Sandy Brittingham, a member of the 50th anniversary committee.

“Whole families gathered together every Sunday after church and brought a picnic lunch,’’ said Cathy Brady, another anniversary committee member. “It’s amazing the friendships they developed and kept through their lives because of the pool.’’

“It was always very family oriented and we’re proud to keep it that way,’’ said Michele Lengvarsky, chairwoman of the Franklin Township Park and Recreation Board, who is liaison to the 50th anniversary committee.

In fact, it was the Curfew Grange 1052 that built the park, which officially opened in June 1961.

“It’s a unique environment — even in 2011,’’ said Lengvarsky, who noted the park today includes 25 acres with six pavilions as well as areas for volleyball and softball.

The focus of the park has been the swimming pool, which was created at the suggestion of Joan Rittenhouse.

In 1959, Curfew Grange purchased the Townsend property and began pool construction the next year. Jim Griffin, who was then master of the grange, remembered that grange members signed personal notes in order to receive financing for the project, which was known as the Curfew Recreation Center.

“It’s important to realize it was a real community effort. My parents, Cathy’s parents, Lewis Mills and Jim Griffin — they all went out on a limb,’’ said Brittingham, daughter of Wylie and Joan Rittenhouse.

While some doubted if it would be built, the grange completed the park. But the community rallied and funding for the $60,000 pool received a lift when the grange entered the project in the Sears & Roebuck Foundation Community Service Project competition and won a second-place award of $5,000.

Through the decades, the park became a haven for the public that enjoyed the facilities, especially the pool.

Brady said, “Some days it was so packed, they had to blow a whistle and clear the pool just to keep track of everyone.’’

The 50th anniversary committee, which is a subcommittee of the park and recreation board, includes members whose parents were on the Curfew Grange board when the park was built. They are Brittingham, whose parents were both on the board; Brady, whose father Ralph Allen was a board member; Dorothy Chaikcic, whose father Lewis Mills was on the board; and Jim Griffin, who was master of the grange in 1961; as well as community members Christine Rusinack and Stephanie Rosinski.

The park board includes Patti Grimplin, Dale Rosinski and Bill Rittenhouse. Tom McCracken, chairman of the Franklin Township supervisors, is a liasion to the park board.

Many of these residents remember growing up with the pool. They praise the grange members for creating the park and operating it through the years.

Community support for the park continued to be strong when Franklin Township took over ownership in 2007 and the name was changed to Franklin Community Park.

“The residents petitioned us to take over,’’ said Melvin Lerch, who is a township supervisor, along with McCracken and George Bozek.

“It’s great that the township’s been able to keep it going,’’ said Griffin.

Last year, the township conducted the first part of a $1.1 million renovation project, with the majority of the work performed on the swimming pool. It included refurbishing and enlarging the main pool and adding tot and intermediate areas that are both handicapped accessible. About 10 water-play features were added, ranging from water sprayers to slides. A new concrete deck was added around the pool, which is heated. Floodlights were added around the pool. This year’s renovation will include the bathhouse and snack bar.

To help with the local match, fundraisers continue to be held monthly. And Griffin and Wiley Rittenhouse spearheaded a donation campaign last year that raised $3,000.

An appeals letter issued by the park and recreation board for that campaign read in part, “We are proud of our accomplishments to date to maintain this fun, family facility that all can enjoy. Parks and recreation are an important part of a healthy community and allow families and neighbors to enjoy a spirit of community not found in all areas.’’

The pool opened in the middle of last summer to great reviews. Membership, which is open to anyone, grew from 43 to almost 200. Members come from all parts of Fayette County.

Griffin pointed out the park also gives local youths an opportunity for their first job, such as working as lifeguards. McCracken noted that students from Uniontown Area Senior High School have inquired about volunteering at the park for their senior projects.

Groups from churches and Scouts host overnight camping in the park. A camp for autistic children is held for six weeks in the summer. The park was the site of sledding parties this past winter.

Officials have even more plans to improve the park. Lengvarsky and McCracken talked about the eventual renovation of the pavilions and ballfield and putting in a walking trail.

Originally published in the Herald Standard in 2011.