The rock festival is off and the J. Harold Arnold farm vacant, but a group estimated to number 800 to 1,000 remained encamped last night on another farm a few miles away.

Mrs. William King reportedly gave permission to a few hitchhikers to stay overnight on her property. That number quickly swelled and last night the property contained about all of the rock enthusiasts remaining in the area.

The hillside about four miles north of the Arnold farm off Route 201 was dotted with campfires last night. Intents, in campers, in vans and on the group the group was apparently preparing to continue its stay unless ousted by authorities.

One hippie-style boy about 20 was asked what he thought of the cancellation of the festival.

“A real bummer man,” he replied. He expressed puzzlement at the unpopularity of the rock-fest.

He said he hitch-hiked into the area from his home in Baltimore, Md. He first learned the festival was canceled when he was stranded for a time on Interstate 70 in Pennsylvania.

Asked what he planned to do now, he answered that the music wasn’t the main thing.

During a brief tour through the encampment, wine and other alcoholic beverages were readily visible but the scene was calm much like that of any other tourist-packed camping area during the summer.

At the access lane to the field where the youths made themselves at home, several members—one equipped with a bullhorn—were directing traffic in and out of the area. As much in evidence as the hippies were curiosity seekers.

One young boy and girl were passing out a leaflet with information on an organization in Pittsburgh where one might seek aid on various problems ranging from Medical and legal aid to cheap mechanics, school problems, a “bum trip”, a “place to crash” or just someone to “rap” with.

Some 90 to 100 State Police, many from outside the area brought in to augment the local sub-station, patrolled the highways.

Most of the estimated 3,500 who journeyed from various parts of the United States and at least one reportedly from Canada, had left the Arnold property by shortly before noon yesterday.

Roadblocks were set up a short distance south of the Arnold farm and north of that location at Flatwoods. A third roadblock was established on Route 201 near the Route 51 cloverleaf. “We’re turning back as many as we can,” a spokesman said.

A number of arrests was reported last night. All those apprehended were reportedly picked up along the highways. One was charged with public nudity but the others were charged with various violations of drug possession.

One woman notified police and had a vehicle towed from her property. The owners of the vehicle reportedly threatened reprisals.

Operating from the Curfew Grange, troopers were being fed and given brief rests from patrol duties. A call for food issued by interested citizens in the Flatwoods area brought an overwhelming response.

The heaving traffic along Route 201 and a number of side roads consisted of persons traveling from communities such as Perryopolis, Beallsville, Richeyville, Grindstone and Belle Vernon with food items of every description for the troopers.

Three persons were hurt in an accident reported on the Arnold farm about 1:30 p.m. yesterday.

Charles Mincin, 20, Oliver Lee, 18, both of Pittsburgh,  and an unidentified 17-year-old were injured when they were hit by a passing motorist as they slept in the tall grass along the roadway.

They were reportedly treated at the Connellsville Hospital and discharged.

A Dunbar man was treated at a physician’s office in Dunbar yesterday afternoon for a laceration of the hand suffered in an altercation with a group of hippies in Vanderbilt.

According to State Police reports, James E. Hardy, 46, of Fourth St. was driving his car on Route 819. When he approached the intersection with Route 201 in Vanderbilt, about 25 of the group were blocking the intersection.

A heated exchange occurred and one of the youths reportedly hit Hardy across the hand with a portable stove.

Meanwhile, attorneys for the promoters of the rock-fest appealed to higher courts to overturn the injunction prohibiting the event from taking place. Efforts yesterday were unsuccessful, however.

Many of the rock fans, apparently searching for a place to spend the holiday weekend, were reported at Cooper’s Rocks State Forest in West Virginia where about half of the camp sites there were reported occupied last night.

The youth were evicted from the Arnold farm without any incidents yesterday.

When fog cleared from the area at about 8 a.m. the festival-goers began to move out, slowly.

They had been read a copy of the court’s order by Deputy Sheriff Thomas Hamilton.

Hamilton, on Thursday, following issuance of the court’s order, had requested the aid of the State Police, who responded and took up positions along the roadway to keep the flow of traffic moving.

By 9 a.m. yesterday, 130 state troopers from Troops A (Greensburg), B (Washington) and D (Butler) had converged on the scene, under the command of the Area 5 commander, Maj. Howard M. Jaynes.

Seventy-five of the troopers were equipped with riot helmets and batons and were marched into the Anna Mary Lake area where the young people had pitched tents, set up a camping area and congregated for the past two days.

The troopers stood by on a knoll overlooking the camp area while the young people left the scene by car and on foot.

At noon, however, when the last of the festival-goers had failed to leave the area as fast as officials had wanted, the troopers marched into the camp area and dispersed them.

Mr. Arnold, who was at the camp site as the young persons moved out, said “it’s all over now…I didn’t realize at the time what I was getting myself into.

“The promoters had told me this would be a music festival, not a rock festival, that there would be melodious music and the blues.”

Mr. Arnold said his concession stand on the grounds was broken into during the night and some $2,000 worth of merchandise stolen.

By Len DeCarlo, originally published in the Morning Herald on Saturday, May 29, 1971 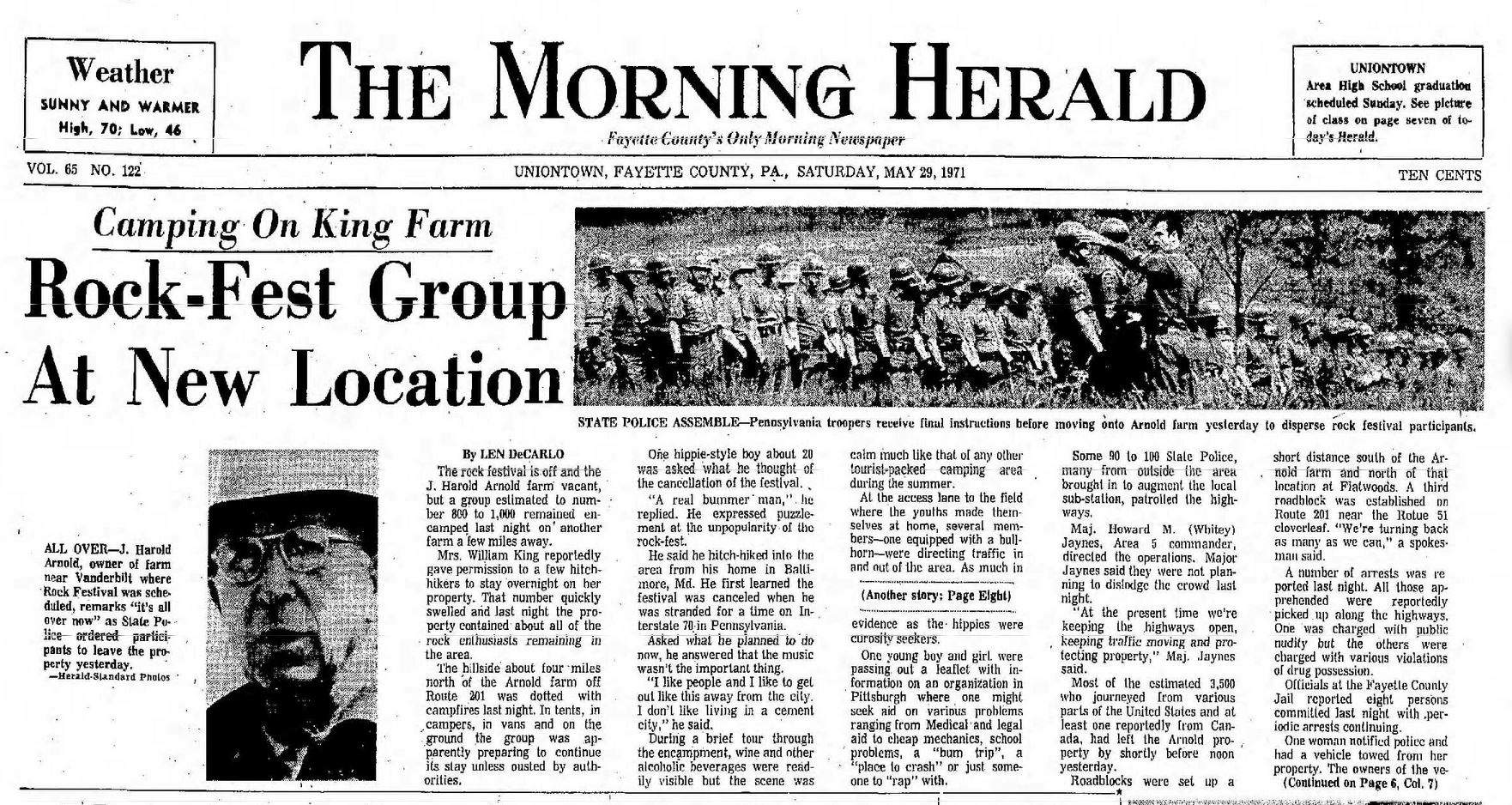 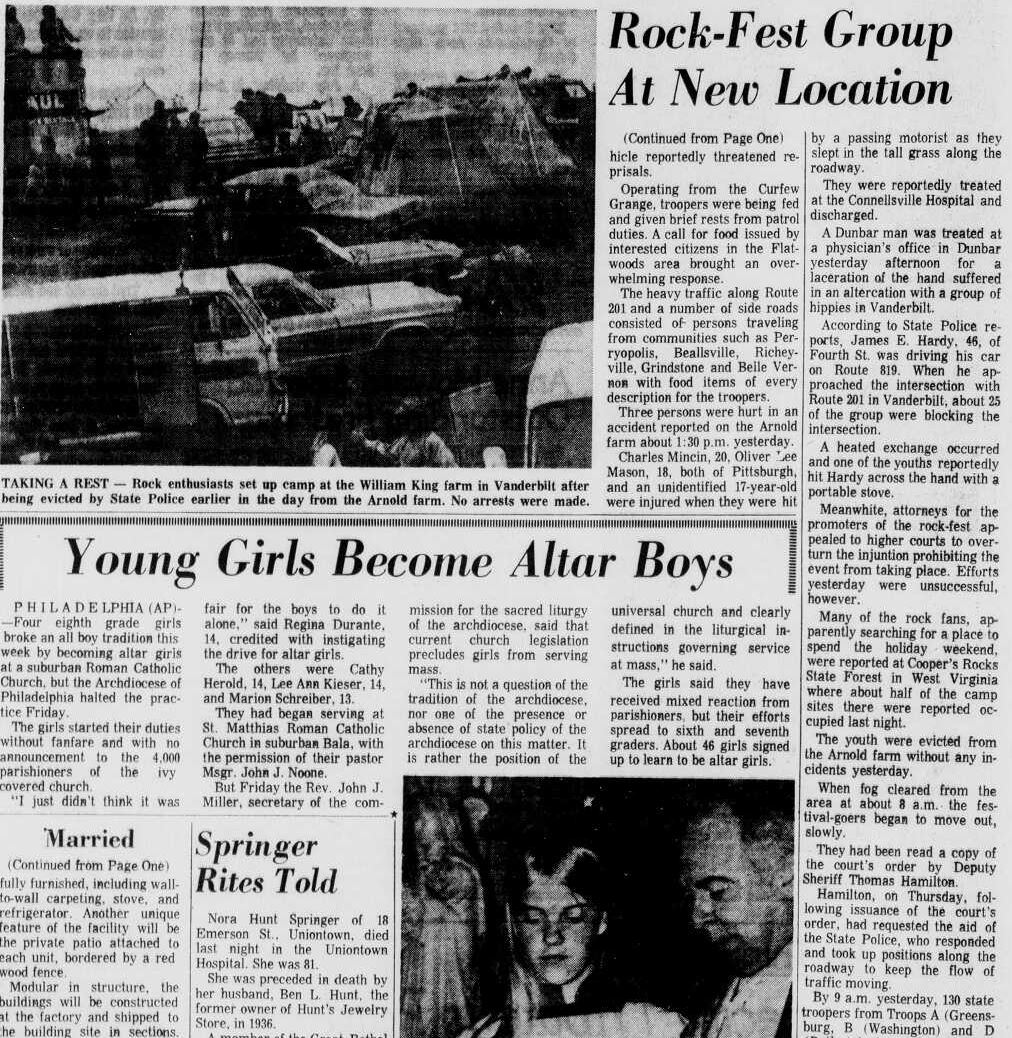 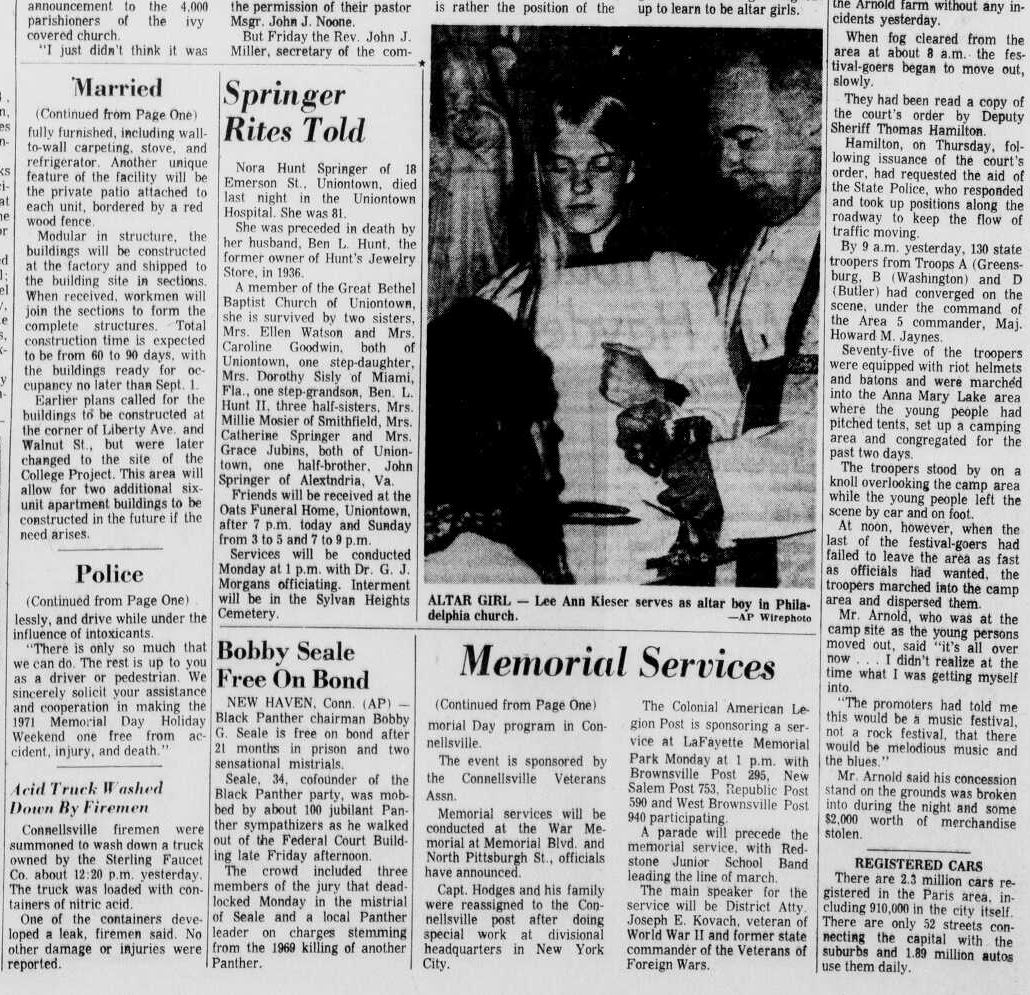