Origins of the Curfew Grange 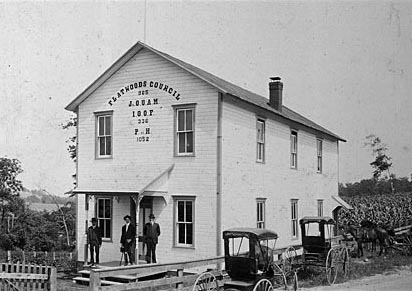 This photo of the Curfew Grange is from the collection of Mrs. Emma Cook Dennis. Mrs. Dennis turned 94 on August 16, 2001. She lived in Star Junction and Perryopolis and taught at Perry High School. Her sister, Edna Cook Lepley, was Barry Lepley’s mother. Their father was Henry S. Cook.

The site is a lodge hall in Flatwoods. According to the initials on the building, the hall served three fraternal organizations: the Junior Order of United American Machinists, the International Order of Odd Fellows, and the Patrons of Husbandry (P of H, also known as the National Grange). The date of this photo is unknown; probably late 19th century.